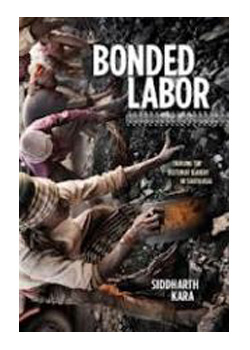 “Bonded Labor: Tackling the System of Slavery in South Asia is Kara’s second explosive study of slavery, this time focusing on the pervasive, deeply entrenched, and wholly unjust system of bonded labor. From his eleven years of research in India, Nepal, Bangladesh, and Pakistan, Kara delves into this ancient and ever-evolving mode of slavery, which ensnares roughly six out of every ten slaves in the world and generates profits that exceeded $17.6 billion in 2011. In addition to providing a thorough economic, historical, and legal overview of bonded labor, Kara travels to the far reaches of South Asia, from cyclone-wracked southwestern Bangladesh to the Thar desert on the India-Pakistan border, to uncover the brutish realities of bonded labor in such industries as hand-woven-carpet making, tea and rice farming, construction, brick manufacture, and frozen-shrimp production. He describes the violent enslavement of millions of impoverished women, children, and men who toil in the production of numerous products at minimal cost to the global market. He also follows supply chains directly to Western consumers, vividly connecting regional bonded labor practices to the appetites of the world. Kara’s pioneering analysis encompasses human trafficking, child labor, and global security, and he concludes with ten specific initiatives to eliminate the system of bonded labor from South Asia once and for all.” (Amazon and GoodReads)