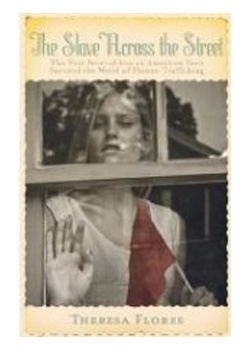 “In this powerful true story, Theresa Flores shares how her life as an All-American, blue-eyed, blond-haired 15-year-old teenager who could have been your neighbor was enslaved into the dangerous world of sex trafficking while living in an upper-middle class suburb of Detroit. Her story peels the cover off of this horrific criminal activity and gives dedicated activists as well as casual bystanders a glimpse into the underbelly of trafficking. And it all happened while living at home without her parents ever knowing about it. Involuntarily involved in a large underground criminal ring, Ms. Flores endured more as a child than most adults will ever face their entire lives.”

•   Buy the paperback or Kindle version at Amazon